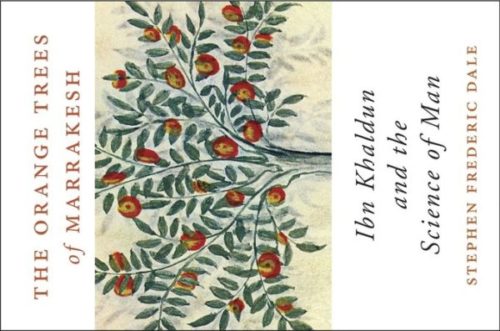 In his book, The Orange Trees of Marrakesh: Ibn Khaldun and the Science of Man, Stephen Dale offers an extensive, highly original and extremely relevant contribution to scholarship concerning Ibn Khaldun, who was among the leading names in history to develop a philosophical, rational, and scientific approach to the study of human social organization. Not only does Dale provide a detailed intellectual biography and critical analysis of Ibn Khaldun’s Muqaddimah, he also advances multiple theses of his own that deserve serious consideration across a variety of disciplines. According to Dale, “The single greatest disappointment in the existing scholarship on Ibn Khaldun is its failure to explain how philosophy permeates and structures the Muqaddimah” (x). Dale argues that it is indicative of Western scholarship to treat the Muqaddimah as a bizarre production of an alien culture, “rather than as an important milestone in an intellectual tradition that linked Greeks with Muslims and Europeans in a common philosophical culture” (261). Dale convincingly demonstrates throughout his book that the Muqaddimah does belong in the intellectual tradition beginning with Herodotus and continuing through twentieth-century Western scholarship (261).

“Dale provides his readers with an impressive synthesis of the incredible complexity and breadth of the Muqaddimah, and at the same time criticizes its methodological shortcomings and inconsistencies. For example, he points out that asabiyah is an insufficient explanatory variable for social breakdown…”

Dale is responding to the surge of scholarly interest in Ibn Khaldun in the late twentieth and early twenty-first century. Indeed, since the publication of Dale’s book in 2015, works on Ibn Khaldun have multiplied, including Farid Alatas’s monograph Applying Ibn Khaldun: Recovery of a Lost Tradition in Sociology, an entire issue of the Journal of Historical Sociology (vol. 30, no. 1) devoted to him, and Robert Irwin’s recently published, Ibn Khaldun: An Intellectual Biography. Despite scholars’ admiration of the Muqaddimah, Dale argues, it “has not been absorbed into the mainstream of Western scholarly life but continues to be held, admiringly, at arm’s length” (261). Dale therefore aims to trace the influence of the Greco-Islamic philosophical tradition throughout the Muqaddimah, thereby refocusing scholarly attention on the “philosophical core” at the heart of the work. First, Dale sets the historical context in which Ibn Khaldun lived and worked. This was the “exceptionally unstable, impossibly complex Berber and Arab dominated tribal political environment” and the “fragile, vulnerable Granadan state.” The deterioration in both Andalusia and North Africa prompted in Ibn Khaldun a “deeply felt cri de coeur,” and motivated him to write the Muqaddimah as a means for exploring this decline (73). Dale synthesizes a vast and highly complex body of Greek philosophy and Islamic philosophy and theology, boiling it down to those elements most immediately relevant to Ibn Khaldun’s project. Ibn Khaldun determines the primary goal of history to be the discovery of “information about the essence of things,” to be achieved principally by employing inductive reasoning and logic. Making this assertion required delicately separating historical from theological inquiry without undermining Islamic faith. Dale then outlines Ibn Khaldun’s historical method and dialectical model. According to this method, one needs to discern the underlying nature of the society under investigation based on his/her own experience, collect evidence, and use deductive logic to compare it with his/her knowledge. Likewise, the dialectical model explains the transformation in North African society, which he attributes mainly to a weakening of asabiyah (social cohesion) across multiple generations (e.g. Ibn Khaldun reasoned that social solidarity was very strong among the nomads as a necessary consequence of their lifestyle. However, as nomads naturally transition into city dwelling luxury inevitably begins to flourish in the sedentary lifestyle, and so too there is an equal loss of social solidarity as the deterioration of asabiyah exactly matches the increase in abundance).

Dale provides his readers with an impressive synthesis of the incredible complexity and breadth of the Muqaddimah, and at the same time criticizes its methodological shortcomings and inconsistencies. For example, he points out that asabiyah is an insufficient explanatory variable for social breakdown. Asabiyah was not widespread in North African tribal states, and conquest was also achieved through “decades of brutal warfare…driven by rapacity.” In addition, tribal states lacked a stable system of succession, meaning that intertribal competition could be fierce, and asabiyah was not a given (201-203). Moreover, he offers numerous other critiques throughout, eventually even claiming that that Ibn Khaldun’s work is “full of ambiguities, uncertainties, omissions, and outright contradictions” (252-253).

Was Ibn Khaldun a Philosopher?

However, with as much time and spilt ink Dale dedicates to pointing out and analyzing the contradictions in Ibn Khaldun’s work, one might be surprised to find that Dale leaves his own readers with many unresolved prima facie contradictory concerns. For example, on the same page Dale writes, “In the Muqaddimah Ibn Khaldun developed what he considered to be a universally valid science of man and applied this new philosophical science to formulate a comprehensive account…(and) Ibn Khaldun was not, however, a philosopher…and did not suggest his dialectical model was universally valid” (254).

According to Dale, Ibn Khaldun had no difficulty holding contradictory views of faith and science (74) and was an unquestioning believer through his lifetime (84). For example, the contradiction of Ibn Khaldun’s defense of revealed religion and his support of Aristotelian ideas of causation, “represents one of the most serious unresolved issues in the Muqaddimah…” (101). Dale asserts that because Ibn Khaldun was not a philosopher he had no trouble compartmentalizing ideas and because he internalized Islamic doctrine (216), “there is no reason to believe that he was even aware of the contradiction, since he summarizes aspects of religious and philosophical knowledge separately” (103). But surely these arguments of Dale’s require further investigation. Perhaps Ibn Khaldun randomly inserted God into his philosophically informed dialectical model in order to keep serious political dangers at bay. Dale stresses this is not likely given his personality (196-197), but he also assumes that Ibn Khaldun’s private emotional life will forever remain hidden (21). Dale does grant that, “Ibn Khaldun’s comments can leave readers uncertain as to what he ultimately thought about the relative values of religion and philosophy” (75). Dale even admits that oftentimes Ibn Khaldun can be viewed as forfeiting his faith, however he also claims that this is almost “certainly” not the case (295). But why not so certainly given the various other factors including the enormous political pressures of the time? At any rate, the claim that Ibn Khaldun was not a philosopher, internalized his religious faith and was unquestionably compartmentalized in these areas deserves further investigation.

Dale’s decision not to include an additional chapter on twentieth and twenty-first century scholarly analysis of Ibn Khaldun is a curious omission. He acknowledges that there has recently been “a flood of Western, Turkish, and modern Arab studies of Ibn Khaldun’s work” (261), but he does not systematically review this literature’s findings, strengths, and weaknesses, having stated in the preface that presenting an account of extant scholarship on Ibn Khaldun “would require a separate volume” (xii).  However, if Dale’s objective is to place Ibn Khaldun and his ideas in full context for the contemporary reader, then it would be better for him to carry his analysis beyond the Enlightenment to the present day. This is especially the case if his underlying argument is that the scholarship has not adequately engaged with Ibn Khaldun’s philosophy. Indeed, his assertion that Ibn Khaldun’s ideas are peripheral is increasingly becoming arguable, as scholars in multiple disciplines consider and integrate them into their work. Since Dale chooses not to place his own ideas in dialogue with the recent literature, the reader cannot fully assess where he is situated.

Nevertheless, Dale’s book is an absolutely exceptional read for both students seeking an introduction to Ibn Khaldun’s work and the veteran Ibn Khaldun reader. The Orange Trees of Marrakesh is incredibly detailed and provides an insightful offering on intellectual biography and detailed histories of relevant cities, comprehensive descriptions of Ibn Khaldun’s model, critical analysis of Khaldun’s work. Dale additionally advances important theses of his own that are extremely relevant to modern scholarship and curriculum. Most importantly, Dale convincingly demonstrates that Ibn Khaldun and his Muqaddimah deserves to be included in the intellectual tradition beginning with the ancient Greeks and continuing through to the twentieth century.