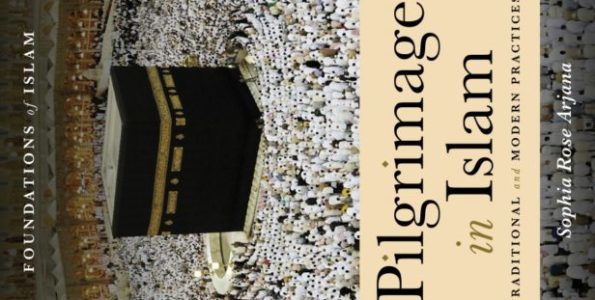 Sophia Rose Arjana, in her new book Pilgrimage in Islam: Traditional and Modern Practices, offers an innovative and important introduction to pilgrimage in Islam. And while the cover design may lead some to suppose the work is yet another trek down the well-worn path of Hajj scholarship, Arjana is quick to point out that Muslim pilgrimage encompasses much more than the fifth pillar of Islam. She opens with a curious statistic, that Hajj with its 2-million annual pilgrims is – not – the most widely practiced pilgrimage in Islam.  That accolade goes to Arbaeen, the annual pilgrimage in Karbala, Iraq, commemorating the martyrdom of Hussein, grandson of the Prophet Muhammad.  Arbaeen – with 20-million yearly pilgrims – simply dwarfs the Hajj numerically. And while specialists may wonder whether her Arbaeen figures were inflated (and Hajj deflated) to emphasize the contrast, her point is well taken. Arjana uses it to engage readers and set out on her new scholastic path – “providing an expansive study of Islamic pilgrimage that is inclusive, geographically diverse, and attentive to the rich traditions that characterize Muslim religious life” (xv-xvi). Importantly, Arjana contends that “Islamic pilgrimages number in the thousands” and she aims to give “equal weight to the experiences of different Muslim communities” (xxiii).

“She leads readers on a global trek, stopping in Touba, Senegal; Mashhad, Iran; Tembayat, Indonesia; and Detroit, Michigan – among many others.”

She is primarily interested, therefore, in the physical and discursive dimensions of pilgrimage –what Muslims do with their bodies and what they say those activities mean – rather than the authoritative claims Muslims make about what Islam is or should be. She leads readers on a global trek, stopping in Touba, Senegal; Mashhad, Iran; Tembayat, Indonesia; and Detroit, Michigan – among many others. She discusses materiality and technology, the pre-Islamic origins of some pilgrimages, and the melding of faith traditions at other locations. To build this expansive and inclusive case, Arjana draws from the scholastic contributions of anthropologists, historians, cultural critics, and art historians. And through this prism, she both challenges people’s underlying assumptions and introduces them to the worldwide Islamic phenomenon.  The text serves as the fourth installment of the Oneworld Academic series titled ‘Foundations of Islam.’ It is most valuable when read as a whole, but individual chapters stand on their own.  Arjana deliberately wrote the work to be accessible to a wide audience and useful for university (undergraduate and graduate) courses. Beyond reading this review (or purchasing the book), readers can engage with Arjana’s material through her New Books Network interview.

Between Complexity and Clarity

A question is likely to arise as readers settle into the book’s five substantive chapters: How will Arjana make sense of the complex and multifaceted phenomenon of pilgrimage in Islam, giving it the nuance it deserves, while maintaining a clear, accessible narrative that writing for a broad audience demands? How, in other words, would she find narrative stability between the competing demands of complexity and clarity? In overcoming this challenge, Arjana strikes that balance by giving readers easy access-points. She uses familiar terms such as Sunni, Shia, Sufi, and so forth. But as readers find their footing, she adds complexity and explains how the terms tell an incomplete – and not entirely accurate – story, particularly when viewed through the lens of sacred destinations. For example, understanding Arbaeen as an exclusively Shia pilgrimage is somewhat misleading – Sunnis participated historically, and some continue to make the journey today.

“Arjana introduces readers to the conceptual tools and theoretical debates within pilgrimage scholarship.  She familiarizes readers with concepts such as movement, mobility, sacred space, ritual, relics, and ziyarat.”

In other places, Shia’s visit Sufi graves, and Sufis perform religious practices at all manner of sacred sites. Readers, thus, gain an appreciation for the inadequacy of broad-gloss labels while also coming to understand the various and diverse ways Muslims perform pilgrimages. Narrative stability is one of the book’s strengths.

Flow of the Book

In Chapter 1, Arjana introduces readers to the conceptual tools and theoretical debates within pilgrimage scholarship.  She familiarizes readers with concepts such as movement, mobility, sacred space, ritual, relics, and ziyarat.  She introduces the theoretical contributions of scholars such as Henri Lefebvre, Victor and Edith Turner, Edward Soja, J.Z. Smith, and others.  But she is quick to note that she does not tie her contribution to one theoretical position (26).  She is also keen to point out that not only do scholars debate Islamic pilgrimages, but Muslims themselves have different opinions.  They, too, dispute the legitimacy – or illegitimacy – of various pilgrimage sites and practices. One particular strength of Chapter 1 is Arjana’s critique of the oft-repeated secular-sacred divide in Western scholarship. Since pilgrimages take place at shrines, tombs, homes, mosques, graveyards, rivers, forests, and mountains – sites with diverse histories, memories, and imaginations – mapping pilgrimage onto a secular-sacred canvas is simply irrelevant. Pilgrimage is better understood through the complex interplay of physical geographies, discursive narratives, overlapping histories, material artifacts, and bodily acts.

While Arjana repeatedly challenges the idea that Hajj is the only and dominant pilgrimage in Islam, she does recognize its importance and discusses it in Chapter 2. But in alignment with her project of unsettling assumptions, Arjana historicizes the sacred rite and puts it in dialogue with early Islamic pilgrimage rituals in Jerusalem. Readers thus discover the complex, melding genealogies of Islamic pilgrimage in all three sacred cities – Mecca, Medina, and Jerusalem. And this material, too, strikes an agreeable complexity-clarity balance by giving readers attachment points to other faith traditions, ones with which they may be more familiar.  Her inclusion of the Fadail al-Quds, for example, the medieval Islamic texts extolling Christian and Jewish attachments to Jerusalem, invites readers to appreciate the evolving dynamics of discourse and practice of Islamic pilgrimage in Jerusalem. Readers begin to realize that the story of Jerusalem has not always been one of conflict and contention, the one that dominates today.  That said, Arjana’s work on Jerusalem is also an opportunity missed. She quickly glosses the contentious dynamics of Muslim pilgrimage in contemporary Jerusalem. A brief discussion could have acted as a compass, guiding readers through the difficult terrain.

Comments on Chapters 3 (Shi’i Pilgrimage) and 4 (Sufi and Shared Pilgrimages) align with remarks already made above; namely, that the work’s strength is adding complexity and nuance to basic concepts and terminology – Arjana gives sufficient information and context to pique readers interest without bogging down in unnecessary detail. She does repeat herself occasionally, but this could be interpreted one of two ways: editorial neglect or deliberate strategy to make chapters independently cohesive. In Chapter 5, titled Modern Muslim Pilgrims, Arjana explores how “capitalism, mobility and technology help us understand the ways Islamic pilgrimage is changing in the modern world” (149-50).  Her discussion centers on the overlapping dynamics between pilgrimage and modern tourism, the commodification of religious experience, and how the internet and other technologies have changed the way people relate to sacred space. Pilgrims in Mecca, for example, use iPhone apps for navigation and now post selfies to Facebook, Twitter, and Instagram. One program called Second Life even allows people to perform the Hajj through a virtual, three-dimensional avatar (188). These technological examples are sure to interest readers whose own lives are increasingly nested between off- and online experiences.

While Arjana claimed to take no specific theoretical position, readers would wonder if her attempt at inclusivity became, itself, her theoretical position. She made no apology for giving equal weight to all Muslim pilgrimage experiences. And as a result, whether a Muslim visited the tomb of a Hindu-turned-Muslim saint in Jakarta, Indonesia or journeyed to Kandahar, Afghanistan to view the cloak of the Prophet, their experience was deemed valid, relevant, and worthy of attention. She allowed readers to engage Islam from the margins, both geographically and from the standpoint of Islamic discursive authority. And this is where her implied theoretical position emerged – that the most appropriate analytical focus was the individual or localized communal experience.

“After reading the book, a reader could also begin to wonder: when academics produce this type of inclusive, ground-up, lived-religion scholarship, are they not implicitly promoting a new form of structural authority?”

After reading the book, a reader could also begin to wonder: when academics produce this type of inclusive, ground-up, lived-religion scholarship, are they not implicitly promoting a new form of structural authority? People on the margins of faith traditions are given a leading voice in the story while the traditional structures of religious authority are sidelined. This formulation seems western – possibly a new, updated epistemological projection. In the old formula of western projection, scholars read their secular-sacred view of the world into non-Christian religious traditions. And as Arjana notes, the tendency had caused distortions (12-13). But with the new projection, scholars seem to place individuals and their personal experiences at the center of analyses. What gets lost, then, is how individuals imagine their involvement in broader (possibly global) religious traditions. And this institutional flattening seems endemic to contemporary western scholarship. This is not necessarily a criticism of Arjana’s work, but as a way of inviting scholars to another level of critical engagement and reflexivity. In short, Arjana’s work is a great introductory resource – an orienting guidebook – for those embarking on a trek of understanding pilgrimage in Islam.  Readers should feel warmly – and expertly – welcomed.  Arjana has given them an excellent map.