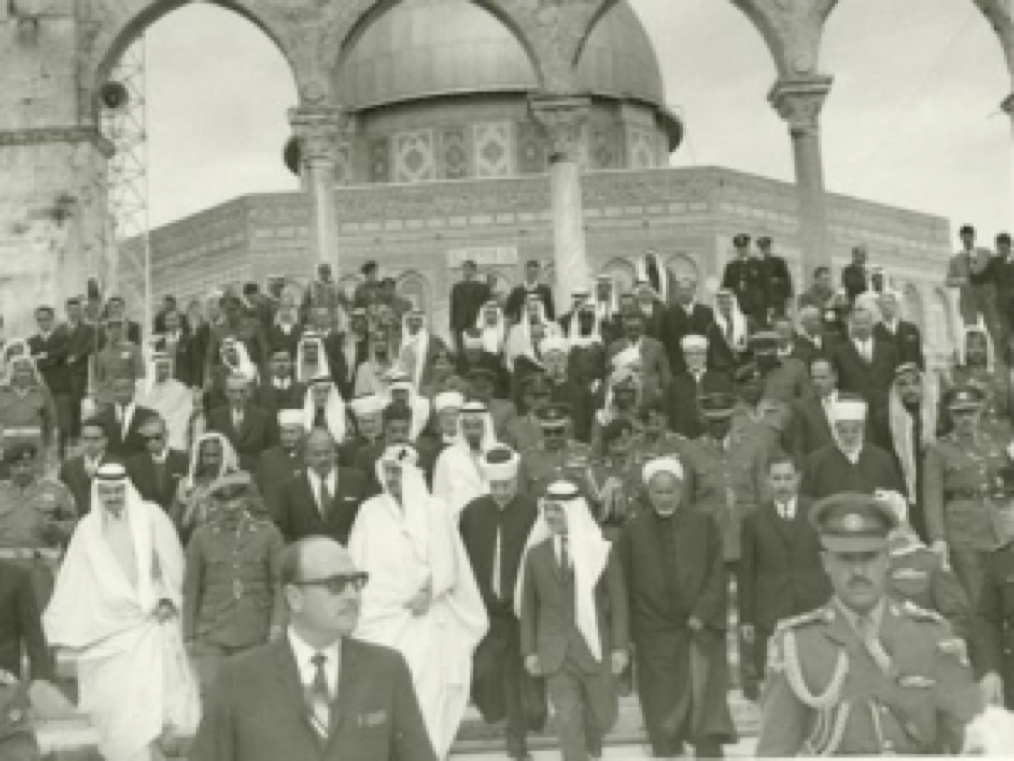 After an illustrious career in public service in Jordan, a Mauritanian ʾālim by the name of Muhammad al-Amin al-Shinqiti requested that King Hussein grant him the post of Ambassador of Jordan to Saudi Arabia, so that he might be close to the burial grounds of the Prophet Muhammad and the holy mosques of Mecca and Medina. His wish was granted in 1963, and al-Shinqiti became the head of the diplomatic corps in Jeddah.

During his sojourn as a diplomat in 1975, the space race between the West and the Soviet Union had just about winded down. Al-Sharq al-Awsat, the pan-Arab daily newspaper, relates an incident involving a foreign diplomat from an unnamed country who brought moon rocks with him to impress Ambassador al-Shinqiti at his office in Jeddah.  Al-Shinqiti was unenthused. He retorted, “I would much rather see the rocks of Jerusalem than these rocks from the moon. Please inform your government of this.” The stern scholar was known for his brusqueness, so his sour response to the crestfallen diplomat was not at all surprising.

“’I would much rather see the rocks of Jerusalem than these rocks from the moon. Please inform your government of this.’”

Al-Shinqiti’s devotion to Jerusalem was evident throughout his career. He served as the first chair for the Hashemite Fund for the Restoration of al-Aqsa in 1954, a mere three years after he witnessed the assassination of King Abdullah I in Jerusalem. As the King’s right hand man, al-Shinqiti was right next to the King the moment he was killed. Though he remained in Saudi Arabia until the end of his life in 1990, it is clear from the incident with the foreign diplomat that al-Shinqiti had not forgotten Jerusalem, and certainly not the events of 1967, when Israel occupied East Jerusalem and attempted to take over al-Haram al-Sharif, before the Jordanian waqf (religious endowment) establishment took it back.

The Hashemites and the Scholarly Family from Bilad al-Shinqit[1]

The loyalty and devotion of ʾulamā like al-Shinqti who helped found modern Jordan point to the inextricable ties that the Hashemites have to Islam’s holiest sites in Mecca, Medina and Jerusalem. After all, before the founding of modern Jordan, the Hashemites, as direct descendants of the Prophet Muhammad, ruled the Hijaz in the Arabian Peninsula from 1916-1925, until the eventual takeover by the Al-Saud household. It is often ignored that the briefly existent Hashemite Kingdom of the Hijaz can be considered the first “official” modern Arab state post-Empire.  A careful look at the Hashemites’ history in the Hijaz tells of a richer, deeper history of modern-day Jordan than seen in versions of its history focusing solely on the period following its independence in 1946.

As the Ottoman Empire’s stronghold over the Muslim world waned, Muhammad al-Amin al-Shinqiti’s father, Shaykh al-Khidr, dubbed a marjiʾ of his time, traveled to the Hijaz in 1912 to rally behind Sharif Hussein ibn Ali. Sharing the same impetus as his son, al-Khidr left Mauritania after the French colonial incursion and immigrated eastward to Medina out of sheer love for the Prophet and the ahl al-bayt, for he believed only they could protect the holy sites of Mecca and Medina from Ottoman shortcomings and British and Najdi incursions.

There, al-Khidr served as the Chief Maliki Mufti of Medina, and enjoyed a thriving scholarly milieu in which he taught knowledge seekers from across the world and penned many important treatises on the most pertinent topics of the time. Under Sharif Hussein’s rule, the Great Mosque of Mecca was also a center of knowledge: each gate to the compound corresponded to four “schools” surrounding the kaʾba, one for each Sunni Islamic legal school. At these schools, pilgrims and students could freely enter and receive instruction from the most learned ʾulamā of the time. This represents, a far cry from the intellectually-desiccated state of Mecca today, where such schools have had to limit their activity elsewhere and the main knowledge pilgrims receive is the state-sanctioned sermon on Fridays.

When, following complex colonial political maneuvering, the Al-Saud family invaded the Hijaz in 1925, the scholar al-Khidr had already accompanied the founder of modern Jordan, Sharif Abdullah bin al-Hussein, to found the Emirate of Transjordan in 1921.  Al-Shinqiti became the Emirate’s first Chief Qadi and his son al-Amin inherited much of his father’s legacy of religious and political service to Jordan’s kings. This begs the question: why would a scholar from remote Mauritania endorse a Hijazi tribe and emigrate with them from the Arabian Peninsula to found a brand new state project in what is to him unknown territory, the Levant? Proximity to Jerusalem was a key motivator: from Transjordan, al-Khidr would frequently travel to al-Aqsa to conclude works he began writing in Mecca and Medina to perform taqdīs on them, much like the traditional practice of sealing ones hajj journey with a pilgrimage to al-Quds. Cosmopolitan figures like the father and son al-Shinqiti serve as interesting windows to understanding the transfer of knowledge and power as modern states solidified into the Arab world we know today. Ultimately, the Shinqitis left West Africa on a pilgrimage of love. Their love for the Prophet, the holy sites, and the ahl al-bayt, gave them clarity in politically confusing times.

“Why would a scholar from remote Mauritania endorse a Hijazi tribe and emigrate with them from the Arabian Peninsula to found a brand new state project in what is to him unknown territory, the Levant?”

The Great Arab Revolt and the Struggle for Legitimacy

2016 marked the centennial of the Great Arab Revolt. The historic event came in confluence with the fall of the Ottoman Empire and the founding of the British-backed modern states in the Middle East. However, the very name of the event betrays the revolt’s true nature and motivation. It was not simply an Arab nationalistic, anti-Turk campaign as it is often glossed over today: it was first and foremost a struggle for Islamic legitimacy. One could say that the rift between Sharif Hussein and the Ottomans was motivated primarily by a desire to restore Islamic-, and not purely Arab-, nationalistic-ideals. This vision is evident in Sharif Hussein’s intellectual project. For example, the slogan of the Kingdom of Hijaz’s newspaper, Al-Qibla, which Sharif Hussein oversaw, was the following Qur’anic verse: “And We did not make the qiblah which you used to face except that We might make evident who would follow the Messenger from those who would turn on their heels.” (2:143). It is clear that the holy sites represented not merely a physical compass, but a moral one too.

The Hashemites and Jerusalem as a Moral Qibla

Today, along with the rise of ISIS/DAISH and their ilk, the struggle for Islamic legitimacy remains as pertinent a battle as ever. This legitimacy will continue to be tied to the status of Islam’s holiest sites. The wealth accrued from petrodollars and the grandiose title of the “Servant of the Two Noble Sanctuaries” has given the Saudi monarchy much leeway in the struggle for Islamic legitimacy in the twentieth century, but the Al-Saud sense of “servanthood” to Islam’s holy sites does not fully extend northward to al-Aqsa mosque, the sacred sanctuary which many view not only as the first qibla in Islam, but the “moral qibla” for the entire Muslim world.

There exists a great deal of literature on Jordan’s military and political history, but very little on its Islamic intellectual history. Perhaps this is due to the fact that Jordan gets brushed off as a pro-Western ally whose Arab nationalist identity outbid its Islamic one. However, there is more to the pragmatic kingdom than meets the eye. Jordan absorbs much of the Arab world’s humanitarian strife despite having few resources. With President Trump’s reckless move to change the status of Jerusalem, the Hashemites once again find themselves at the epicenter of shifting political realities in the Middle East.

“Because it is not about blood or lineage per se; Jerusalem is a litmus test: it is the site to which “the arch of the moral universe” bends towards.”

The recent stances on Jerusalem adopted by King Abdullah have left Jordan at a grave risk of political isolation. When all is done, the significance of Jerusalem as the moral qibla remains unlost on the Hashemites. Whether for their custodianship of the holy sites in the Hijaz in the early twentieth century or al-Haram al-Sharif today, the Hashemites, like the Mauritanian scholar al-Shinqiti, have shown that despite risks of great existential peril, they too draw the line at the “rocks of Jerusalem.” Because it is not about blood or lineage per se, in these politically precarious times where mundane interests reign supreme, Jerusalem reminds us of its sacred power as a corrective litmus test, whose hallowed grounds are the site that “the arch of the moral universe” bends towards.

[1] For many centuries, Mauritania was popularly known in the Arab world as Bilad Shinqit.