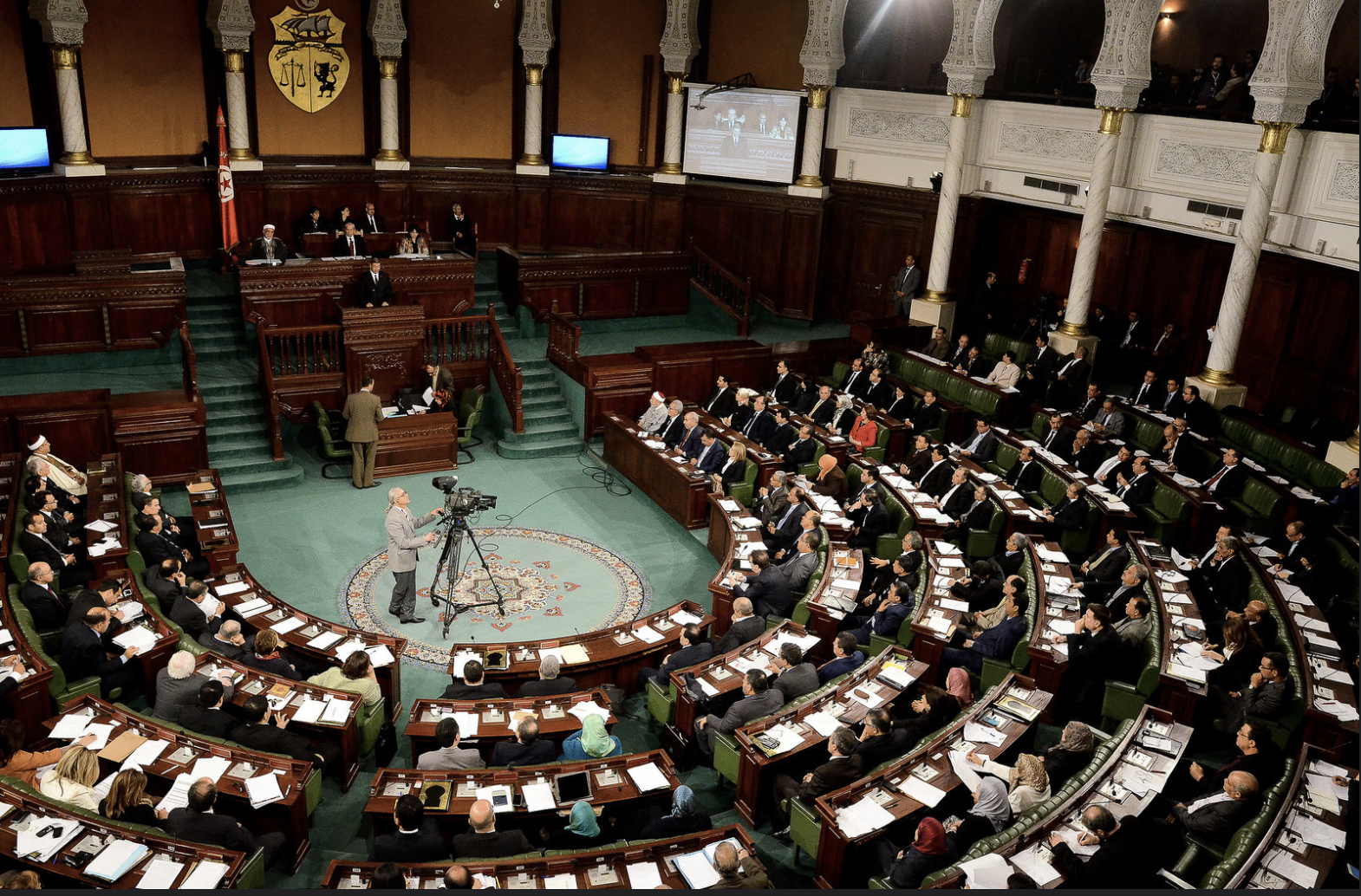 The Arab uprisings started in Tunisia in late 2010, and it seems to be the only place where democratization is succeeding. After president Zine El Abidine Ben Ali fled the country on 14 January 2011, Tunisia witnessed a successful peaceful transition of power, and the country had its first democratically elected government in December 2011.[1] In 2014, a new constitution was passed that enshrined democratic principles and provided guarantees for the rights and freedoms of all citizens. Despite these positive developments, the foundations of Tunisia’s nascent democracy remain fragile, and the country continues to face critical junctures. One of these key junctures is Tunisia’s post-2011 transitional justice process.

“Despite the enormous challenges it continues to face, transitional justice has the potential to redefine the country’s relationship with its dictatorial past, identify past human rights violations and set a framework to help transform the political, economic and social structures that allowed these violations to occur in the first place.”

Tunisia’s transition is unique not only because it is the first of its kind in the region, but because of  its conceptualization of transitional justice and the fact that the institutional structures it opted to use presented new innovations in the field.

In this article I aim to assess Tunisia’s transitional justice process from January 2011 until March 2017. I will argue that despite the enormous challenges it continues to face, transitional justice has the potential to redefine the country’s relationship with its dictatorial past, identify past human rights violations and set a framework to help transform the political, economic and social structures that allowed these violations to occur in the first place.

Below, I first explore how transitional justice began as a set of rushed ad hoc measures in the context of a chaotic political transition, but then became better articulated and institutionalized. Next, I expand on Tunisia’s innovations in conceptualizing and setting up its transitional justice. This includes interalia, 1) the mandate to pursue corruption and economic crimes and not just human rights violations of a political or civic nature, and 2) expanding beyond individual human rights to include collective ones by allowing regions to file as “victims.”

What is transitional justice?

A comprehensive analysis of the evolution of transitional justice is beyond the scope of this article, but it will be useful to briefly define it. According to the International Center for Transitional Justice (ICTJ):

“Transitional justice is a response to systematic or widespread violations of human rights. It seeks recognition for victims and promotion of possibilities for peace, reconciliation and democracy. Transitional justice is not a special form of justice but justice adapted to societies transforming themselves after a period of pervasive human rights abuse. In some cases, these transformations happen suddenly; in others, they may take place over many decades.”

This definition reflects a comprehensive and holistic approach to transitional justice. It also identifies it as an inherently political project, one that is contested and debated. This represents a departure from former conceptualizations of transitional justice as purely legalistic, or as a set of procedures to be checked off a list.  This includes

How did Tunisia start to employ transitional justice? Ironically, it was initiated by Ben Ali himself in the last days of his rule. On his last public speech on 13 January  2011, in a futile attempt to calm protestors, Ben Ali called for the creation of two commissions of inquiry, one to investigate the use of of excess force by security forces that led to 338 deaths and and the second one to investigate corruption and embezzlement charges directed against the Tunisian government.[3]

The commissions were established after the departure of Ben Ali, but in an ad hoc manner. The first truth commission had a limited mandate and only gathered victim testimony on accounts of violence from the start of the revolution in December 2010 until the first elections in October 2011. The commission documented “338 deaths and 2,147 wounded.”[4] To illustrate how ad hoc these early efforts were, the distribution of reparations began before a clear law or decree was issued to regulate the process or determine how much money the government could budget for reparations. There was no clear definition of who constitutes a victim and how reparations were going to be dispersed in a systematic way.[5]

“The first truth commission had a limited mandate and only gathered victim testimony on accounts of violence from the start of the revolution in December 2010 until the first elections in October 2011. The commission documented “338 deaths and 2,147 wounded.'”

In terms of structure, Tunisia opted to set up a whole ministry dedicated to the process. The Ministry of Human Rights and Transitional Justice was formed as early as December 2011. This was unprecedented and some feared that the ministry would monopolize the process and exclude local civil society organizations or various marginalized groups. However, observers have found that it has been able to stick to its mandate to act as a platform to coordinate efforts rather than dictate them until the Ministry was abolished in 2014, and a new commission was set up to lead the transitional justice process.[6]

The Truth and Dignity Commission

The institutionalization of transitional justice truly began in December 2013 when the “Organic Law on Establishing and Organizing Transitional Justice” was passed. The law set up broad frameworks and gave the mandate to create the Truth and Dignity Commission (TDC) in June 2014. The commission is expected to release its final report and recommendations in 2018-2019.[7]

The TDC’s mandate includes investigating all human rights violations since 1955, which means it will also account for violations that occurred during Tunisia’s last year of French colonization from 1955-1956. The ICTJ reports that since its creation in 2014 and until November 2016, the TDC “has received over 62,000 submissions and heard testimony from about 11,000 people,” and in a historic moment it held its first set of public hearings in late November 2016. These public hearings were conducted for a number of hours over two days and broadcasted on live TV and online. From stories of imprisonment, sexual assault to torture, tens of survivors were able to testify and share their story first-hand. As of March 2017, the TDC held a total of nine public hearing sessions, the latest one focused on violations by colonial France during the anti-colonial struggle in the 1950s. This special session was conducted on March 24, 2017 to coincide with the International Day for the Right to the Truth. Reactions from the Tunisian public have been a mix of empathy, anger, pain, and frustration. The biggest concern for survivors and their families was to get the truth of their stories, dignity, and most importantly, voice and pursue their right for justice. The real test for the TDC will be its ability to criminally prosecute those directly responsible for state repression, torture, and killings over the years. It also has the responsibility to outline and push for structural reforms particularly for the judiciary and security sector.

“The TDC’s work has been met with resistance, especially after the assassinations of two political opposition figures in the country led to a near collapse of the government in 2013.”

The TDC’s work has been met with resistance, especially after the assassinations of two political opposition figures in the country led to a near collapse of the government in 2013. Many expressed the need to address current economic and political crises and abandon looking into the past. The head of the TDC, Sihem Bensedrine, expresses this tension in the quote below, as she explains that officials in the state see transitional justice as a threat to the current fragile state:

“The presidency thinks that transitional justice is a threat to the existence of the state itself and does not want to go through with it. According to it, the state is weak and could not bear having to answer for acts committed under the old regime.”[8]

Transitional justice has traditionally only dealt with gross human rights violations, which involved physical assaults such as unlawful imprisonment, torture, sexual violence, or extrajudicial killings. However, in their conceptualization of transitional justice, Tunisians incorporated social and economic rights. This is evident in the second commission of inquiry on corruption and embezzlement established in 2011. Various stakeholders have emphasized that corruption and high unemployment was one of the biggest drivers of the 2011 uprisings. But, is transitional justice a suitable vehicle to deal with such structural issues? After all, transitional justice mechanism is not a panacea; it cannot produce solutions to any and everything.

One estimate found that Tunisia was losing $1 billion annually to corruption.[9] And arguably, corruption affects both political and socio-economic rights exactly because embezzlement of public funds diverts resources that could otherwise serve citizens. Bribery puts a barrier for marginalized groups to access health, education, housing or any other government service. Corruption can also violate a person’s political rights as their right to non-discrimination and fair treatment could be jeopardized.

“Corruption in Tunisia has less to do with a limited number of individuals, and more to do with structures that perpetuate its occurrence.”

Trials may not be ideal to deal with corruption, however, especially when  they are embedded within bureaucratic, political, economic, and social institutions. Corruption in Tunisia has less to do with a limited number of individuals, and more to do with structures that perpetuate its occurrence. For trials to be effective, one needs to clearly identify “a violation, violator, and remedy: without the ability to name each, the power of shaming will be significantly reduced.”[10]

Truth commissions and reparations may have more potential to address a historical and structural issue such as corruption. Through testimonies and investigations, the TDC can identify what social or geographic groups have witnessed corruption more than others and attempt to set in place mechanisms accordingly. Reparations could be applied collectively rather than individually in the form of an investment fund for unemployed youth, or for a governorate that applied as a “victim.” One example of this is the Governorate of Kasserine’s claim to the TDC. The claim argues that Kasserine has suffered social, economi,c and political exclusion under Ben Ali. Located in the rural hinterland, the area was excluded from both public and private investments during the Ben Ali years, and not much has changed during the post-2011 governments. It is interesting to note that while Tunisia’s aggregate GDP  grew in the 2000s, economic growth  actually slowed and unemployment  rose in the rural hinterlands. Indeed, this illustrates the continued existence of deep inequalities in the country. Allowing regions to file as “victims” also represents an innovation in the field of transitional justice and it will be interesting to see how the TDC will respond to Kasserine and other claims of regions as  “victims.”

“Allowing regions to file as “victims” also represents an innovation in the field of transitional justice and it will be interesting to see how the TDC will respond to Kasserine and other claims of regions as  “victims.””

In conclusion, it is important to highlight that Tunisia is not transitioning from armed conflict, as the case in Libya, Syria, Yemen or Iraq. Rather, Tunisia is dealing with a legacy of authoritarianism and repression, which includes political, social, and economic dimensions. This provides the country with a historic opportunity to re-evaluate its past and shape its future. However, there is a risk that the transitional justice process will be sidelined by the ruling elite to manage more pressing crises. With better coordination of efforts between the TDC, the local Tunisian NGOs, and international organizations the process can be strengthened. Indeed, Tunisia’s innovative approach to transitional justice, which incorporates socio-economic issues, carries important lessons for other countries.

[3] International Crisis Group, “Tunisia: Transitional Justice and the Fight Against Corruption,” 3 May 2016, 2.

[4] Kora Andrieu, “Confronting the Dictatorial Past in Tunisia: Human Rights and the Politics of Victimhood in Transitional Justice Discourse Since 2011,” Human Rights Quarterly, Vol. 38 (2), May 2016,  270.

[6] Andrieu, “Confronting the Dictatorial Past in Tunisia.”