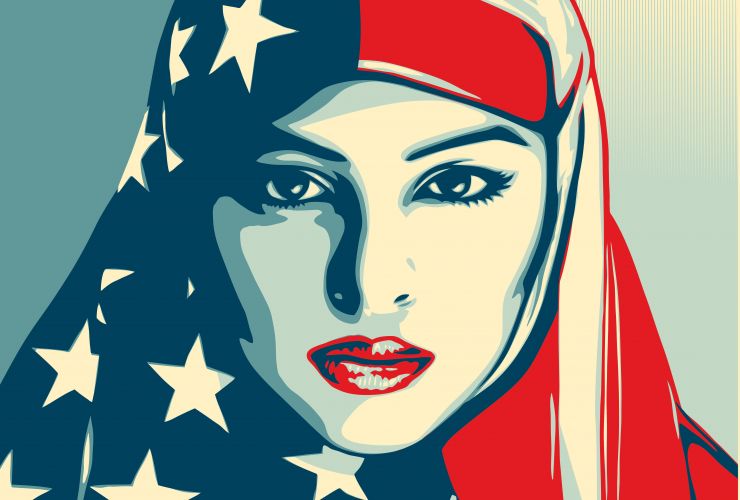 While the Trump administration’s new travel ban, seemingly based upon the now dismantled National Security Entry-Exit Registration Systems (NSEERS) program, is likely to clear judicial scrutiny more easily than the last attempt, the social and political impact domestically and globally is likely to be just as severe. However short-lived the last “Muslim ban” was and however long this one holds, Trump’s fetish for discriminatory Executive Orders has demonstrated how quickly irrational fear and outright bigotry can summon the massive power of the state upon whoever it deems an outsider and affect the lives of thousands. Caught in the crosshairs of a geopolitical matrix, the complex and diverse American Muslim community now finds itself not only faced with an uncertain future but also with the weight of its own historical particularities.

“The most accurate, if unsettling, description of the American Muslim predicament came from a Silicon Valley visionary currently developing entrepreneurial culture in vulnerable global markets: ‘We are a lot like baby seals, one group wants to club us to death and the other wants to save us…we’re just a political football.'”

Although there is no reliable means to actually predict what Trump’s presidency will bring us next, close historical observation tells us that American Muslims will move forward along social and cultural tracts that were set long ago. Over the last few weeks I have had the privilege of consulting key American Muslim thought leaders on significant questions and issues that they and their constituents face in the new political environment. Here, I outline a few of the more salient points of what I have learned along the way.

The most accurate, if unsettling, description of the American Muslim predicament came from a Silicon Valley visionary currently developing entrepreneurial culture in vulnerable global markets: “We are a lot like baby seals, one group wants to club us to death and the other wants to save us…we’re just a political football.” His comments echo the empirical data. Dalia Mogahed, research director of the Institute for Social Policy and Understanding, for example, often tells audiences that Islamophobia and anti-Muslim bigotry increase—not after terrorist attacks like those in San Bernardino or Orlando—but during election cycles. On this point my Silicon Valley interlocutor also lamented, “the most difficult part of this is that we have no voice.”

Indeed, countering Islamophobia in media and politics continues to be the top priority for American Muslim advocacy groups and leaders from immigrant backgrounds who are largely concerned securing their portion of the American dream. For most African American Muslims, however, efforts and energies are focused on building social institutions and alliances to help serve communities where that dream has failed to deliver even the most basic elements of social justice and dignity. It is undeniable that the division between African American Muslims and those of immigrant descent runs deep across the rank and file of the wider American Muslim community’s mosques and institutions. Blackamerican Muslim encounters with the security state date to the mid-twentieth century when they were targeted by the nefarious government surveillance and persecution programs such as the FBI’s COINTELPRO. As Sylvester Johnson’s recent work has shown, much of this activity has served as a blueprint for current tactics the state uses in its far-reaching, and often illegal, counter-terrorism efforts. African American Muslims are therefore uniquely positioned to help inform immigrant based civil rights organizations on the boundaries and limits of political engagement even if the two groups’ immediate priorities are severely misaligned.

“Blackamerican Muslim encounters with the security state date to the mid-twentieth century when they were targeted by the nefarious government surveillance and persecution programs such as the FBI’s COINTELPRO.”

With the appointment of Sebastian Gorka, a well-known peddler of vitriolic anti-Muslim bigotry, as a senior advisor in the Trump administration, most eyes in the advocacy community are anticipating changes to the complex policy initiative known as Countering Violent Extremism (CVE). Envisioned by the Obama administration as a way to prevent and combat all types of ideologically motivated violence, CVE nonetheless disproportionately policed Muslim thought and practice. However, the overtures of inclusivity and community engagement enticed many American Muslim institutions to participate in programming and compete for grants offered by the Department of Homeland Security and Department of Justice, predictably caus ing major rifts in the leadership of the national community.

As research my colleagues and I conducted last year in coordination with the European Commission and The British Council demonstrated, the so-called CVE sector is fraught with misalignment and mutual distrust by multiple actors in the space. The central intellectual-now turned-ideological question concerns the concept of radicalization: the assumption that there exists an identifiable, measurable, and even predictable pathway that can chart an individual’s progression from a non-violent to violent actor. Most data suggest that no such pathway exists. Most policy makers refuse to accept that data or at least don’t know what to do with it. Divisions in the CVE sector, then, largely revolve around groups that accept the framework of radicalization and those that consider violent action to be the product of intersecting social forces combusting in complex political contexts.

“If for well over a decade, Muslim leaders have found it challenging to change the nature of their relationship with government away from a security-lens framework and more towards a multi-issue dynamic, it is guaranteed that they will find significant challenges in the years to come.”

In the latest twist of the CVE saga, during the final days of Obama’s presidency DHS announced the recipients of its granting programming which included a number of prominent American Muslim organizations. Given that the Trump team reportedly intends to shift the focus of CVE officially and exclusively on countering the so-called Islamic radical threat, four organizations ranging from local non-profits to established university programs have now declined the award. Most of these organizations responded to intense public pressure from their constituents while The Muslim Political Affairs Council (MPAC), the nation’s most institutionally entrenched advocacy group, has continued to implement its controversial Safe Spaces Initiative which identifies mechanisms for communities to manage cases of potential or existing radicalization. If for well over a decade, Muslim leaders have found it challenging to change the nature of their relationship with government away from a security-lens framework and more towards a multi-issue dynamic, it is guaranteed that they will find significant challenges in the years to come.

The most concerning issue for American Muslim institutions, however, is undoubtedly the looming threat that the current administration will move to officially designate the Muslim Brotherhood as a terrorist organization or at least attempt to do so through executive order. While European governments, academic experts, and NGO leaders have long known that the mainstream branches of the Muslim Brotherhood are invested in procedural democracy, committed to non-violence, and largely innocuous, the designation would criminalize any association or interaction with the group through the opaque scope of the “material support” clause of the Patriot Act. The attempt at designation was introduced last fall by Senator Ted Cruz and although similar efforts in the past have failed, the measure may have more viability in the new climate. The designation which would not likely get through congress, would nonetheless have a severe impact on civil society organizations across North America and Western Europe in addition to negatively impacting political relationships abroad. Echoing the draconian measures taken after 9/11 such as the shameful and wrongful prosecution of Dr. Sami Al-Arian, it could be expected that a high-profile, ideologically motivated, prosecution of American Muslim charities and non-profits would begin immediately and thus severely curtail the capacity of these critical institutions. Moreover, relations with European allies such as the UK whose own Foreign Office not only refutes the idea that the MB is a terrorist organization, but also consider it an indispensable asset against Islamic extremism will likely become complicated at a time when the international community is attempting to coordinate efforts against transnational terrorist organizations.

“Echoing the draconian measures taken after 9/11….it could be expected that a high-profile, ideologically motivated, prosecution of American Muslim charities and non-profits would begin immediately and thus severely curtail the capacity of these critical institutions. “

While Muslim civil liberty advocates across the country are bracing for the consequences of a potential designation, the standard-bearers of constitutional protection such as the ACLU, NAACP, and the Brennan Center for Justice have already taken the lead on raising awareness and preparing legal action to curtail and limit the ways in which the federal government might abuse the material support clause. American Muslim organizations are actively mobilizing human and financial resources to work with these and other groups as part of a broad coalitional approach to defeating the overreach of state power. arching paths of political protest. Deep and strong alliances already exist as seen in the work of leading religious and political leaders such as Linda Sarsour and Imam Zaid Shakir who focus their efforts on generating broad coalitional grass-roots alliances such as those forming around the Black Lives Matter and Standing Rock movements. The Council on American Islamic Relations is also making major efforts to mobilize its national network to help address the recent ICE raids which terrorize undocumented workers and their families.

Another space where we are likely to see deep and long lasting cooperation along coalitional lines, between African American Muslims, immigrants, as well as non-Muslim communities is the humanitarian and development space. While ISNA, CAIR, Zaytuna College and MPAC typically dominate the spotlight as the vanguards of American Muslim institutional leadership, it is in fact the humanitarian organizations that bolster the largest constituent and donor bases.

“Cooperation between American Muslims of both immigrant and African American backgrounds are likely to occur along the quest for social justice and along the marching paths of political protest.”

They also, undoubtedly, deliver the most immediate social and political impact through their programming both domestically and overseas. Moreover, with programming targeted at all communities in need, programming such as that of Islamic Relief’s efforts to mitigate the Flint water crisis promise to provide practical solutions to deep histories of ideological, sectarian, and ethnic division in the American Muslim landscape.

Indeed, for those invested in humanitarian work, the pending disaster of the Trump administration pales in comparison to the challenges of millions displaced and disfigured by war. Although the immediate future for the American Muslim community may appear bleak, its history and experiences are rich enough, it seems, to get them to the next election cycle.