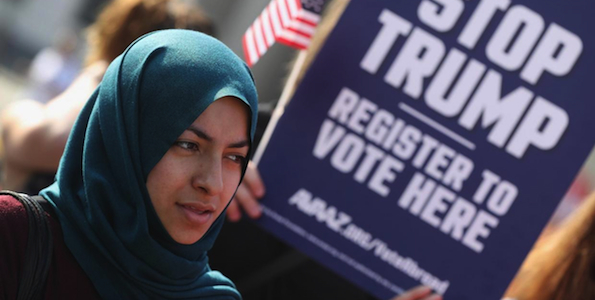 The election of Donald Trump is perhaps the most terrifying episode for Muslims in American history. To the extent that one feels comfortable making predictions when so many have been so spectacularly wrong, I anticipate that the daily lives of citizens, residents, and students of Arab, Mediterranean, Middle Eastern, and/or South Asian descent will become much more difficult and subject to abuse in the next four years. Such challenges and abuse will come primarily from two sources: the American state and American society.

First, when countries perceive a nexus between a minority group and an external security threat, often referred to as “fifth columns,” they tend to subject those groups to maltreatment – even in “liberal” democracies. American Muslims fit the profile of such a group. A decade and a half after the attacks of September 11, American military engagement in the Muslim world, propelled by conflicts against both Islamist jihadis as well as secular authoritarian regimes such as Saddam Hussein’s, shows little sign of abating.

As this external fight against, and in, countries with Muslim-majority populations continues, the view that the United States is at war with Islam enjoys growing popularity in the Trump coalition. Trump famously stated that “I think that Islam hates us.” His supporters view the Barack Obamas and Hillary Clintons of the world as naïfs, or worse, treacherous, for their inability to utter the words “radical Islam.” A whopping 77 percent of conservative Republicans, compared to just 46 percent of Americans overall, and 21 percent of liberal Democrats, claim that Islam is more likely than other religions to encourage violence in its adherents. A 2014 survey found that when rating religious groups on a “feeling thermometer,” Republicans assigned Muslims the lowest rating (33) of all possible groups, narrowly below atheists (34), and comfortably behind the third-least popular group, Hindus (47). In this collective view of right-wing Americans, Muslims abroad and Muslims at home are part of the same problem. Indeed, 47 percent of conservative Republicans believe that “some or about half” of Muslims in the US are anti-American, and a further one-fifth think that “most or almost all” are.

It is this conflation of a war against Islamist terror groups, and one against the religion of Islam and its adherents everywhere, that represents special dangers for Muslims in the United States. It is true that during his campaign, Trump and his supporters were equal opportunity bigots, targeting African Americans, Hispanic Americans, and Jewish Americans alike with hateful and offensive rhetoric. However, the difference between the predicament of these groups upon Trump’s election, serious as it is, and those of Muslims, is that only Muslims are perceived as integral to an external conflict. And when external security is at stake, countries feel little compunction in abandoning norms of decency, fairness, and equality.

“It is this conflation of a war against Islamist terror groups, and one against the religion of Islam and its adherents everywhere, that represents special dangers for Muslims in the United States.”

As such, there is a worrying potential for tougher action against Muslims by the American state under Trump. It is not just that the personalities that will comprise a Trump administration, such as Rudy Giuliani, have bragged about stationing police officers in mosques. It is that such measures are popular among the government’s base. When asked whether Muslims living in the United States should be subject to greater scrutiny due to their religion, 57% of conservative Republicans said yes, while majorities of liberal Democrats (87%), moderate Democrats (67%), and even moderate Republicans (59%) said no. A survey in March this year found strong Republican support for policies such as a ban on Muslim entry into the US (81 percent) and patrolling of their neighborhoods (74 percent).

It seems reasonable to assert, then, that both the candidate that won the election, and the coalition of white nationalists and conservative Republicans that won it for him, favor more stringent measures against American Muslims domestically. It is an open question what such greater scrutiny will entail under President Trump, who was remarkably threadbare on policy details in his campaign. Trump’s performances at speeches and debates, where he proffered ideas such as banning the entry of Muslims into the U.S. and putting certain mosques under surveillance, offer a taste of his preferred direction, but no more. Additional possibilities include the embrace of explicit profiling at airports or the creation of a national registry or database to track Muslims. Even if the precise policies are not yet in concrete, however, the impulse behind them assuredly is. As President-elect Trump said a year ago, “We’re going to have to do things that we never did before. And some people are going to be upset about it, but I think that now everybody is feeling that security is going to rule. And certain things will be done that we never thought would happen in this country in terms of information and learning about the enemy. And so we’re going to have to do certain things that were frankly unthinkable a year ago.”

The role of the Republican Congress

Many of the specifics of state policies against Muslims will depend largely on the priorities and preferences of the Republican House and especially Senate. But it would be foolish for brown-skinned people in the United States to expect the likes of Mitch McConnell or Paul Ryan to stand up for their safety and security. For one thing, it is unclear whether the luminaries of the Republican establishment have the power or wherewithal to resist Trump. If they feared him before his unlikely victory, they are likely to be further cowed now. For another, the Republican establishment is an unlikely representative of minority interests, given that the party’s electoral support is composed almost entirely of whites, both generally and in this election. Finally, it bears remembering that this is the same Republican establishment that, little over a decade ago, institutionalized a policy of torture and mass surveillance in the form of the Patriot Act when confronted by the threat of Islamist terror. As such, a Republican Congress is likely to be a facilitator of, rather than a roadblock against, draconian measures against Muslims, especially in the aftermath of a major terrorist attack by ISIS or al-Qaeda.

That said, one important factor that could mitigate against state victimization of Muslims in a Trump administration is that the Republicans’ agenda could be too focused on domestic economic and regulatory policies, such as repealing Obamacare, cutting taxes for the wealthy, or slashing the social safety net, to consider zeroing in on American Muslims. Barack Obama’s experience suggests that in this era of hyper-partisan legislative gridlock, even parties controlling both the executive and legislative branches have at best eighteen months to advance a policy agenda. The tyranny of prioritization – rather than good faith, ideals, or concerns about minority rights – may spare Muslims the worst of the Republican government’s wrath. But if domestic security remains atop the to-do list for the incoming administration, Muslims will face serious risks to their rights as citizens and residents of the US.

“The tyranny of prioritization – rather than good faith, ideals, or concerns about minority rights – may spare Muslims the worst of the Republican government’s wrath. But if domestic security remains atop the to-do list for the incoming administration, Muslims will face serious risks to their rights as citizens and residents of the US.”

Tough Times Ahead for Minorities

In addition to the possibility of facing state coercion, Muslims in America are likely to see a substantial rise in harassment, threats, and violence from common citizens. A common refrain heard throughout Trump’s divisive and racist campaign was that his rhetoric, and countenancing of support from right wing extremists like the Ku Klux Klan, was enabling and emboldening verbal and physical abuse against minorities, both online and in the flesh. Such abuse is likely to escalate in the coming weeks and months because ethnic polarization and conflict tends to follow leaders’ rhetoric closely. Trump has normalized a discourse of white supremacy that until recently existed only in internet chat rooms, talk radio, and far-right websites. His victory will only exacerbate such normalization, a development for which American minorities will pay.

There are three primary differences between the state taking aim at Muslims and members of society doing so. First, state policy would be necessarily practiced on a mass scale, while attacks from passers-by, fellow commuters, students in the campus yard, or restaurant patrons, say, would be “isolated” incidents. Second, unlike state policy which would single out Muslims explicitly, violence by citizens would be aimed at blacks, Latinos, and other vulnerable ethnic groups as well.

Third, while state policy under President Trump is presently an uncertain outcome, and depends at least partly on the strategies of governance by the GOP, increased violence at the hands of common Americans is all but guaranteed. The aftermath of the xenophobia-fueled Brexit vote in the United Kingdom, where hate crimes against foreigners and ethnic minorities increased markedly once the results were announced, offer a template. Indeed, in the very first 24 hours after his victory, social and traditional media have reported scores of incidents of assaults against people of color by Trump supporters.

My fear, and that of many others, is that this is just the beginning. Those Americans angry at brown people’s presence in their midst, concomitant with what they perceive to be a civilizational struggle against Islam, are increasingly at liberty to lash out, knowing they have a President who speaks their racist language and embodies their racist beliefs. Muslims, and brown people that look like them, need to prepare themselves for a rough ride.