The Ali Vural Ak Center for Global Islamic Studies at George Mason University will convene an international conference on Race and Islam to be held from March 23rd through 25th, 2022 on its campus in Fairfax, Virginia. The conference aims to treat the subject through a set of broad, cross-disciplinary conversations exploring the full range of intersections between race, Islam, and Muslim experience. We invite paper proposals from all disciplines across the social sciences and humanities; all time periods, historical and contemporary alike; and all geographic and cultural contexts globally. 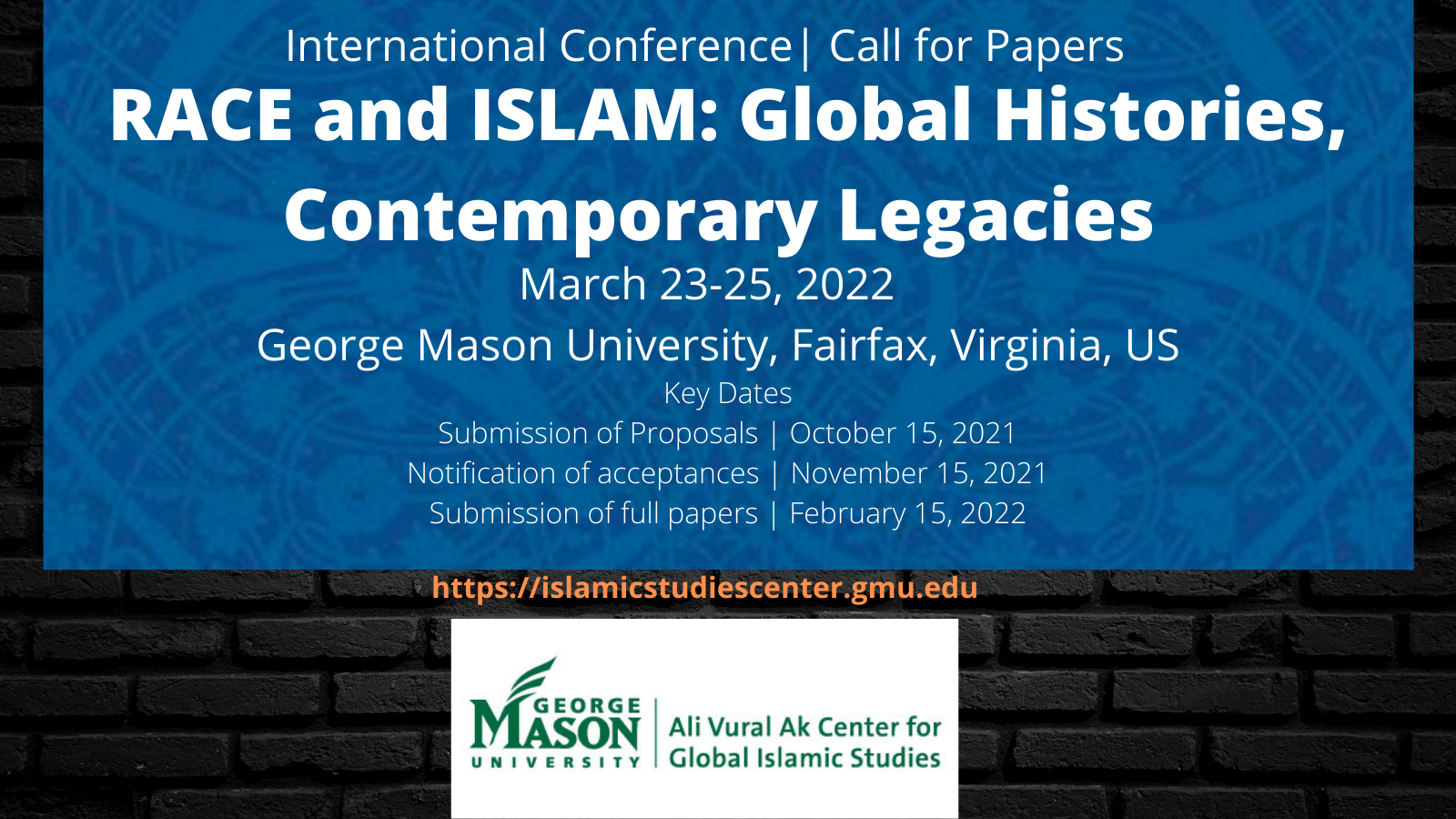 Recent events in the United States have led to a renewed focus in public discourse on the socially embedded legacies of race and racialization. These legacies, however, are byproducts of a much broader global history—one moreover in which Islam has had a consistent role and presence. Race, racism, and racialization have been problematized, defined, and redefined in changing contexts by multiple subject positions, and simultaneously articulated, confronted, and absorbed across various media, institutions and communities. The intersectionality of race with constructs of gender, justice, equality, freedom, faith, ethnicity, and identity has refocused attention on race as a defining theme of academic research, political deliberation, cultural production, and public discourse.

Islam as a faith tradition, both in its historical and contemporary manifestation, has been intricately intertwined with the question of race. While Islam has been subject to objectification and racialization, the lived experiences of Muslims reflect a mixture of indigenous, historical, and modern adaptations of racial categories. The conference, therefore, aims to explore not just how Islam—either scripturally or culturally—responds to questions of race, as has often been done, but also the ways Islam, as a faith tradition, has encountered, engaged with, and reflected particular understandings and experiences of race (not least of all through Islam’s own history with racialized slavery). Cognizant of recent processes through which Muslimness has become subject to racialization, one of the underlying questions of the conference will be how being or becoming a Muslim has been defined and constructed vis-à-vis particular racial discourses and praxes.

Applicants are encouraged to address one or more of the following focal themes of the Conference:

The conference organizing committee particularly welcomes submissions and participation from junior scholars engaged in original research with strong publication prospects. The Center plans to publish short versions (appr. 2000 words) of conference papers on the Maydan, its flagship Islamic Studies digital publishing platform, as part of a special thematic series. Other contributions may be featured through the Maydan Podcast, a family of four thematic streams, one of which—On the Square—has an explicit focus on race and Islam in the Americas.

If you are interested in presenting a paper at the conference, please submit a title & abstract (between 200-400 words) along with a recent CV to Ayşenur Sönmez Kara (asonmezk@gmu.edu) as a single PDF file. We encourage applicants who do not have a record of prior publications to also submit an example of previous academic writing. The Ali Vural Ak Center will provide a stipend to offset travel costs for all accepted papers.